Maintaining valid licensing in vRealize Operations Manager is crucial to getting the most out of the tool. There are two methods of licensing vROps: per processor with unlimited VMs or per virtual machine or physical server monitored. The latter method is also referred to as an Operating System Instance, or OSI. An OSI is any device, physical or virtual, that has an IP address and is capable of being monitored. Powered Off VMs don’t count against your OSI count.

There are three editions of vRealize Operations Manager: Standard, Advanced, and Enterprise.

A vRealize Operations Manager Standard license unlocks the core monitoring and analytics platform. The focus of the standard edition is on vSphere and its components within the environment. This edition includes out of the box dashboards and reports, what-if scenarios and guided remediation. This edition also allows a user to set policies and create alerts with custom recommendations for remediation. This version is included in vSphere with Operations Management and can be licensed standalone per processor or per OSI.

The Advanced edition builds upon the deep analytics of the vSphere environment and adds in many features focused on customization and extensibility. This edition allows administrators to create customized dashboards and reports and to import third party management packs. These management packs extend vRealize compatibility to storage, networking devices, and even multiple clouds. Finally, vRealize Operations Manager Advanced introduces the Endpoint Operations agent, allowing for the monitoring of OS resources from within the virtual or physical machine. This version of vRealize Operations can be licensed per processor or per OSI as well.

vRealize Operations Manager Enterprise extends the reach of the Endpoint Operations agent into applications installed inside the operating system. Data can be collected from databases and applications, such as Microsoft SQL and Apache Tomcat. Enterprise edition is only licensed per OSI.

Licenses can be mixed between license types (Per processor and per OSI) and Advanced and Enterprise versions. This is helpful of you want to license the majority of your environment as Advanced but need to use Enterprise edition on the smaller subset of database and critical application servers. The only restriction is that everything being managed has a valid license.

What if you have a cluster of test machines in the same vCenter Server instance as your production workloads? You can exclude them from being managed and thus avoid licensing them via the concept of License Groups.

A license group is a collection of resources that can be associated with a vRealize Operations Manager license. When a license group is created it can be configured in two ways: The group can always include objects that meet a specific criteria (i.e. virtual machine that contain “prod”) or to explicitly include or exclude specific hosts or VMs.

For example, this license group excludes the VM “ansible”

Excluded VMs don’t count against your licensing. Adding the test machines mentioned earlier to the exclusion list will prevent them from consuming licenses. If you did happen to check out an excluded VM you would see a message that the license is invalid. 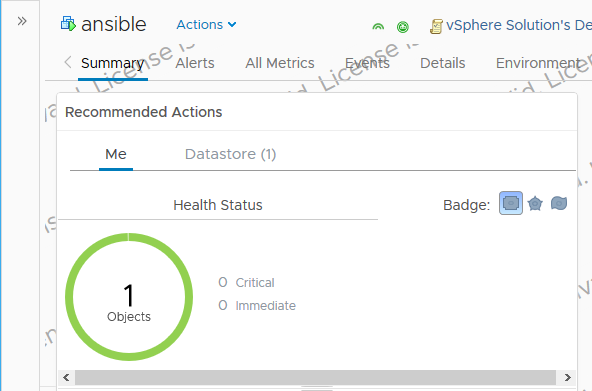